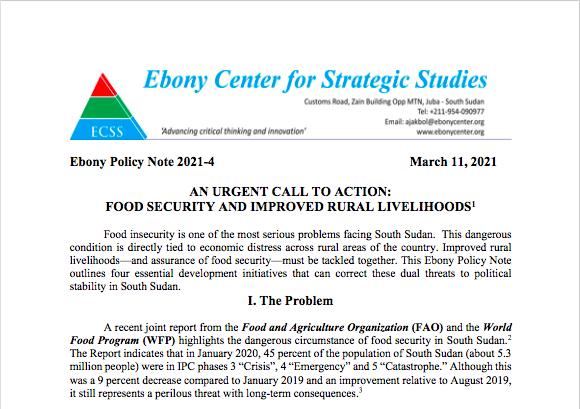 Food insecurity is one of the most serious problems facing South Sudan. This dangerous condition is directly tied to economic distress across rural areas of the country. Improved rural livelihoods—and assurance of food security—must be tackled together. This Ebony Policy Note outlines four essential development initiatives that can correct these dual threats to political stability in South Sudan. 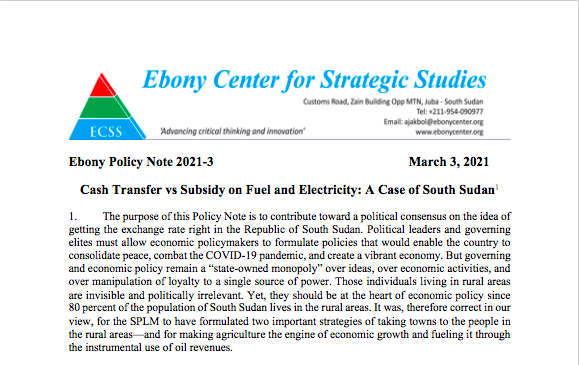 Cash Transfer vs Subsidy on Fuel and Electricity: A Case of South Sudan.

The purpose of this Policy Note is to contribute toward a political consensus on the idea of getting the exchange rate right in the Republic of South Sudan. Political leaders and governing elites must allow economic policymakers to formulate policies that would enable the country to consolidate peace, combat the COVID-19 pandemic, and create a vibrant economy. But governing and economic policy remain a “state-owned monopoly” over ideas, over economic activities, and over manipulation of loyalty to a single source of power…. 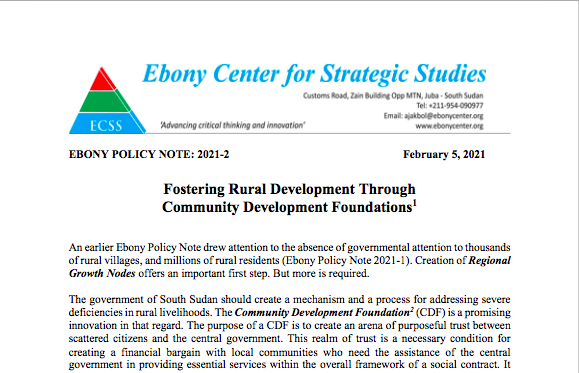 The government of South Sudan should create a mechanism and a process for addressing severe deficiencies in rural livelihoods. The Community Development Foundation2 (CDF) is a promising innovation in that regard. The purpose of a CDF is to create an arena of purposeful trust between scattered citizens and the central government. This realm of trust is a necessary condition for creating a financial bargain with local communities who need the assistance of the central government in providing essential services within the overall framework of a social contract. 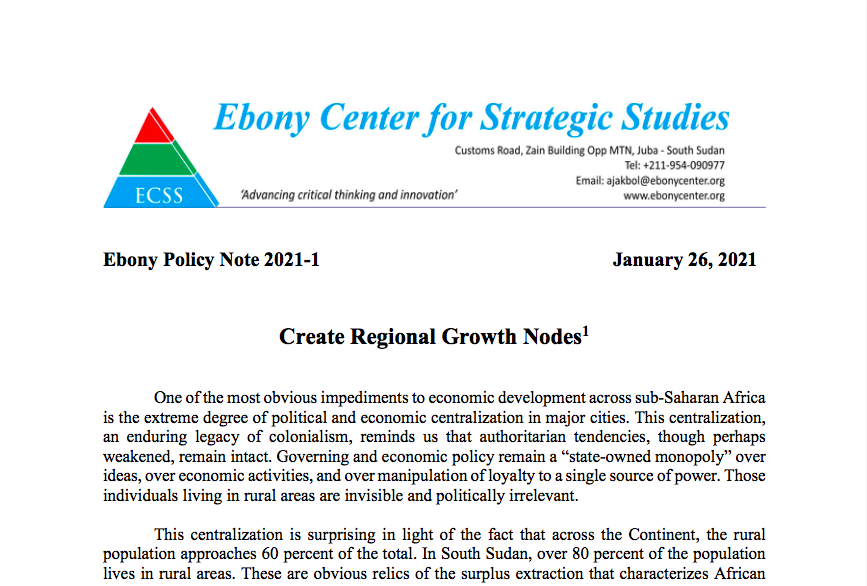 One of the most obvious impediments to economic development across sub-Saharan Africa is the extreme degree of political and economic centralization in major cities. This centralization, an enduring legacy of colonialism, reminds us that authoritarian tendencies, though perhaps weakened, remain intact. Governing and economic policy remain a “state-owned monopoly” over ideas, over economic activities, and over manipulation of loyalty to a single source of power. Those individuals living in rural areas are invisible and politically irrelevant. 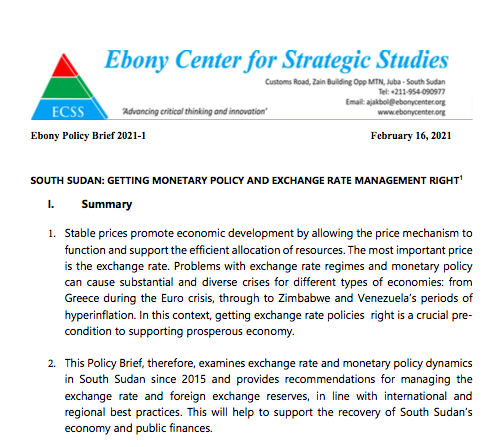 The Urgent Need of Creating a State in South Sudan.

On July 9, 2011, South Sudan emerged from its long civil conflict with Sudan and became an independent nation. Now, a decade later, it is still not a state.

In this Policy Brief, we explain why South Sudan is not yet a state. More importantly, we explain why peace is impossible until the Government of South Sudan (GoSS) is able to provide promising livelihoods to its people. Only then will the severe economic paralysis give way to a promising future for all its citizens. While constant demands for peace are understandable, that same commitment and energy should instead be directed toward state creation. Peace is impossible if plausible livelihoods are impossible.

Economic Policy Response to COVID- 19 Pandemic: the challenge for South Sudanese Policymakers on where to start and how?

South Sudan became an independent nation on July 9, 2011. Eight years later it is still not a coherent state. Coherent states require two essential attributes—one of which is structural in nature, the second of which concerns processes. When these two necessary conditions are absent, the economy cannot perform its necessary functions, and civil conflict is inevitable. These necessary structural and procedural parameters are institutions.

South Sudan became an independent nation on July 9, 2011. Eight years later it is still not a coherent state. Coherent states require two essential attributes—one of which is structural in nature, the second of which concerns processes. When these two necessary conditions are absent, the economy cannot perform its necessary functions, and civil conflict is inevitable. These necessary structural and procedural parameters are institutions.

The fundamental challenge for fiscal space in the FY2017/2018 budget of the Transitional Government of National Unity (TGoNU) of the Republic of South Sudan is the inherent indiscipline in the management of approved budgets. One of the root causes of this indiscipline is the lack of effective oversight from the legislative branch of government. The paper reviews the government’s share of oil revenues during the first half of FY2017/2018 to show that there was a fiscal space during this period emanating from improved oil production and rising oil prices than the budgetary benchmarks. However, indiscipline in budgetary execution has not allowed TGoNU to make use of this opportunity. The paper, therefore, calls for enhanced oversight of the budgetary process through the establishment of a transparency and accountability forum (TAF) that will include all the stakeholders.

The main thesis of this paper is that the economy of South Sudan is showing characteristics of a dollarized economy. Within six (6) months of the adoption of a new exchange rate policy in December 2015 by the monetary authorities, the economy of South Sudan would seem to have, without official acknowledgement, entered the third phase of a “dollarization process!” That is, our economy is at the stage in which economic agents think in terms of “foreign currency” and “prices in domestic currency are indexed to the exchange rate,” which is consistent with the literature on dollarization. If the economy is proven to have entered such a stage, then appropriate fiscal and monetary policy instruments would be needed to protect the purchasing power of the population from skyrocketing prices.

Risk Assessment of the Mining Industry In South Sudan: Towards a Framework For Transparency and Accountability

This study, “Risk Assessment of the Mining Industry in South Sudan: Towards a Framework for Transparency and Accountability”, was commissioned by Ebony Center for Strategic Studies. It commenced in the second week of May 2019 and was completed by the first week of June. Mr. Azaria Gillo, a geologist working in the Ministry of Mining was my research assistant and his contribution led to the success of the research work. I thank him very much.

Weekly Monitoring of the Foreign Exchange Rate Market in Juba

Summary of this week's Monitoring of the Foreign Exchange Rate Market in Juba.

CALL FOR RESEARCH PROPOSALS ON: The Impact of Charcoal Production on The Ecology and Economy of South Sudan

Fiscal Federalism: A Framework for Enhancing Transparency and Accountability in South Sudan

South Sudan is classified as one of the fragile states whose fragility is driven by three key drivers: injustice; inequality; and ethnic tensions. In this regard, the central premise of this paper is that inter-governmental fiscal relations, if well designed, would be the foundation for efficient, effective, and equitable allocation of resources, which would in turn tackle the three drivers of fragility.

South Sudan’s economy is currently under a severe stress, which has its origin in three powerful shocks: a) violent conflict that erupted on December 15, 2013; b) subsequent drastic decline in the daily oil production in Upper Nile State with oil fields in the Unity State completely shutdown; and c) the drop in oil prices in the international market for crude oil by about 63% in September 2015 compared to that of June 2014.

South Sudan still suffers from fiscal dysfunction and flawed management of scarce financial resources; Government agencies continue to disregard the legal Appropriations Acts by overspending or diverting funds to items that fall outside of approved budgets; Tax revenue in the Q3 of 2015 rose less than budget projections; Serious distortions persist in all markets—including currency; The economy must be diversified to escape the dangerous reliance on oil; Units of government should face future cuts to avoid overspending; Tax collections should be improved through administrative reforms; and Deficit financing should be eliminated or brought under control in line with the Bank of South Sudan Act 2011.

This ‘Conceptual Framework for Resolving the Crisis of Governance and Leadership in South Sudan‘ states the problem as political dysfunctionality. The paper uses two analytical tools to articulate the nature of the crisis: a 3-circle Venn diagram and a fragility trap. For nine (9) years, the SPLM leaders now in conflict did nothing to improve the plight of their citizens. In this regard, a transitional government of national unity (TGNU) led by the same actors will ensure that South Sudan remains in the vicious cycle of fragility for years to come. Instead, what is needed is an Interim Government of South Sudan (IGSS) that is guided by an overarching vision of sustained peace, economic growth, and poverty eradication.

A Keynote Speech to the Political Parties Leadership Forum during the “Democracy Dialogue” Organized by the International Republican Institute and held at Quality Hotel.

Exiting the cycle of conflict in South Sudan

The violence in South Sudan in 2013 punctured the euphoria surrounding the ending of 21 years of conflict (1983–2005) and the emergence of South Sudan as an independent nation in 2011. The economic factors contributing to the political instability have been apparent since independence, yet they have not been addressed with any urgency. On the one hand, the traditional sources of livelihoods such as farming and cattle-rearing remain devastated. On the other, the flooding of the economy with revenue from oil exports has skewed incentives towards capturing rents. Falling oil reserves, as well as price volatility, are adversely affecting South Sudan’s economy. Arresting the deteriorating situation will require investing oil revenues and aid resources in building capacity to diversify production and trade.